The morning glory blooms but an hour
And yet it differs not at heart
From the giant pine that lives for a thousand years.'
Matsunaga Teitiku

'Veil upon veil will lift, but there must be
Veil upon veil behind.'
Sir Edwin Arnold
Posted by Jack Fielding at 09:20 No comments:

Posted by Jack Fielding at 04:13 No comments: 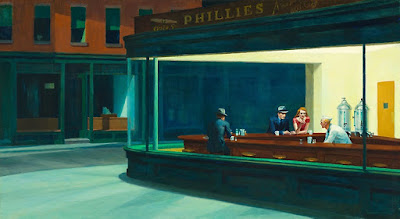 Edward Hopper said that Nighthawks was inspired by “a restaurant on New York’s Greenwich Avenue where two streets meet,” but the image—with its carefully constructed composition and lack of narrative—has a timeless, universal quality that transcends its particular locale. One of the best-known images of twentieth-century art, the painting depicts an all-night diner in which three customers, all lost in their own thoughts, have congregated. Hopper’s understanding of the expressive possibilities of light playing on simplified shapes gives the painting its beauty. Fluorescent lights had just come into use in the early 1940s, and the all-night diner emits an eerie glow, like a beacon on the dark street corner. Hopper eliminated any reference to an entrance, and the viewer, drawn to the light, is shut out from the scene by a seamless wedge of glass. The four anonymous and uncommunicative night owls seem as separate and remote from the viewer as they are from one another. (The red-haired woman was actually modeled by the artist’s wife, Jo.) Hopper denied that he purposefully infused this or any other of his paintings with symbols of human isolation and urban emptiness, but he acknowledged that in Nighthawks “unconsciously, probably, I was painting the loneliness of a large city.”

Milo the Monk is packing a seriously big gun. Trying to find some cool clothes. The Colonel orders Luther and Rei to take Milo out before he finally gets dressed and figures out who he’s meant to kill. Then all hell breaks loose. Murder and mayhem as Milo, the yakuza, Luther, Rei and the Colonel all head into town for the final bloody showdown.

What is the secret behind the extraordinary painting that Peter steals?

A wickedly irreverent tale of swashbuckling adventure, Buddhism, fighting and death (but not necessarily in that order), conspiracy, medieval pelicans and rather nice cups of tea.

Siriwan welcomes you to the Chrome Kimono 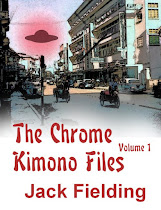